A Great Surprise from Great Friends! Things like that are what you need sometimes...

So I was at home, very tired, as I went on a fishing trip yesterday on the boat (it was great, even though I ended up cramping for the rest of the day =P I'm not at my best and it was a 6am start!), but I had to go somewhere - hospital, not as a patient, but to meet  a friend actually.

And god... I couldn't be stuffed... And it probably wasn't healthy. But I'd made a promise. And I knew I'd actually have a good time. So I was texting a friend, ready to go, when Mum came in. She'd had a day off, and was eating food when she saw me getting up.

"No Nikhil, take it easy today." she said through a mouthful, rushing to sit in the chair beside my bed. "It's my day off today, stay home with me. C'mon, Nirav's making lamb curry too! Oh, and you had a big day yesterday, you need to rest."

"Jeez mum, I gotta go!" I said, dragging myself up, shoulders slumped. I wasn't feeling my best but I had made a promise.

After a bit more insisting though, she lured me into conversation, urging me to stay, annoyingly, inbetween topics, and eventually, I gave up and texted the friend saying "I'll catch you next week!" before slumping back into bed, muttering under my breath about how annoying it was to have such a clingy mum...

Then I heard the door open. And a few voices.
Odd... Dad had just left for Melbourne for a family function. Nirav, my bro, he wouldn't have gone out... he was midway through cooking...

Then Nirav himself popped into the room, too soon after the groan of the front door (he couldn't have gotten up that quick surely), absently checking in, a slight smile on his face for some reason....
It was clear, at least, that someone was home...

And then these guys popped in, handing me this mysterious bag - a gift - and I couldn't stop smiling!

It was my basketball buddies! Since high school (I got sick in the last year of it), it was hard to catch up with anyone - we were so far away, broken up and separated, in the new friend groups we'd developed at Uni and Work.

But a tradition had begun, and I'd joined in on it, of always catching up and playing basketball for HOURS on end in our mid-semester breaks. And it was glorious! The best times of high school came back in those few hours, where our less fit versions of our young selves tried to resurrect our mostly lost talent.

The last few ones though I'd missed. You know... things like a third cancer popping up outta nowhere and nearly going blind tend to impede my perfect jump shot and awe-inspiring dunks...

I REALLY wanted to go! But I knew I couldn't, so I'd always post "Sooon!" or "Devos!" when that notification came up on Facebook...

But hey! They'd brought it to me this time! And they'd also gotten me the perfect gift! 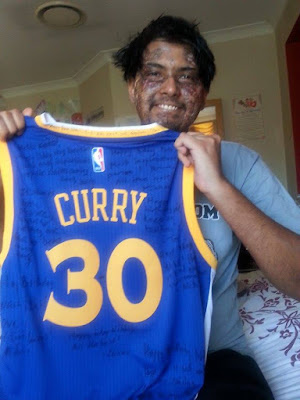 A PERSONALLY SIGNED Steph Curry (the MVP of the NBA this year, possible/probable contender for the greatest shooter EVER) Jersey!!
Not by Steph Curry... by my basketball buddies. but hey, I'll take what I can get =P

The gift was perfect not only because my raw shooting talent and touch at the 3 point line has been compared with some of the greats, but because Nirav was making them, lamb curry (watching Jerry - the strapping lad on the right - barely gulp it down, even with 10 spoons of yoghurt after that, and sweat from the heat was classic!), because I loved the way the team played and most importantly - because the Number - 30 - represented something amazing!

It took my a while to guess why. They kept urging me to anyway...
"Is that Shaquille O'Neal's number?" When I was in year 7, I'd had my growth spurt before the other kids, and was, let's say, "well rounded", so I had the nickname Shaq on the court. Maybe that was it.
"My scoring average?"
"How many girls I'd been with?" (to which I had multiple scoffs, and cries of "Bullshit!")

The actual answer took me a while. But with a few hints, I'd got it.

Bloody awesome! A LOT more symbolic than this other gift I'd gotten from mates during chemo... And sooooo cool of them! I'm still smiling as I write this.

I'll keep it forever, that's for sure - never to be washed again, to keep their signatures on. I know they're shaking their heads as they read this (I used to always be known as the guy who sweated so much he could slip between players, so an unwashed shirt would be POISONOUS almost I'd say)... it's just how I roll Haha!

There's another awesome aspect to this gift though.... They'd been planning this for the last few months. Some of you who follow my Facebook page may know that I was in hospital during my birthday... again (I've also spent my 18th in hospital, alone almost) and that despite the suckiness, a few acts of kindness made it an amazing day... Especially ones like this.

(do click and read it - the full post is here. My nurses gift to me as soon as it hit 12, straight after I'd mused about how sucky it was to be stuck there on the day. This, and a shot of morphine for post surgery pain. What more could you want?)

These boys had actually planned this surprise for me then! But circumstances had stopped either me from being there, or them being available.

And today was the perfect day. Not only because I was missing out on some of the best fun that was our quarterly basketball meet-up - but because there's been tension going on at home for a bit too...

It's hard being a chronic patient... I've talked about that a lot. But it's just as hard - if not harder - being the carer of one. "They're the ones that have to be stronger than the patient, to hold them." as my mum said, perfectly. Which is hard to do when you're feeling helpless as your loved ones go through pain...

And the last few weeks especially have been especially painful. The cramps that have plagued me for the last year and a half have come back with a vengeance after one of my treatments (Ironically, that treatment is supposed to take away the cramps... Hopefully in the long term...) started. I had 2 doses before the surgery in August, and 2 doses afterwards. And each time... the cramps had gotten ten times worse after them! The next few days after a dose, I'd LITERALLY cramped 24/7... I didn't get any sleep then. Even now, every time I get up, I cramp, and new areas are involved, like my neck, and possibly even my esophagus, close to my windpipe. So I'm not only cramping, I feel like I'm choking too...

In this time, I've often reverted back to the level of a baby again. I'd scream out "WATER!" and someone would have to get it (I couldn't get out of bed - hell - I couldn't even roll over and sip it half the time. I have a pack of straws handy by my bed), "MEDS!" and they'd sort through the pile of them on my desk and give them to me, "FOOD!" as I found myself hungry, at the oddest hours, and unable to get it...

And they'd be there. Everytime. Sometimes after a bit because they were busy (or in the case of my brother, playing games, which I'd scream at him for afterwards, as it'd often leave me no option but to hobble over, crouched in pain, to get what I needed)... but they'd not JUST be there, they'd do awesome stuff like this today to keep me HAPPY too!

It's the other stuff though... the driving me to poker (the one and only thing that gets those annoying cramps off my mind), to dropping me to occasional adventures with friends, the annoying "Get the remote!", "Find my phone!" and, the too-usual "Can you find my <insert item here>", NOW please!" - that they were understandably frustrated about.

But they didn't get that I was frustrated too. That these things - I needed them to not just feel normal, but BE SANE. That I WAS giving up things - I could've gone to hundreds more parties, events, games in that time frame but I didn't to keep them happy, or because I was afraid of their annoyed reaction. And they don't realise how crappy it feels to see that begrudged, annoyed face when you're in pain, thrashing around in bed; when you NEED someone to help... and they hate always being the one to do it.

They've said some horrible stuff to me. And I've said horrible stuff back. I've screamed at them... too many times.. and it happens over and over again, as the annoying disease (graft versus host disease) beneath all this threaten to bubble up and burst in our faces week on week, month on month, year on year...

But it was THEM - as well as my friends - who made this happen. They kept it secret for a good 2 months, planned for it to happen on multiple days, only to have it knocked back because something came up, and made it happen today... after we had a HUGE fight last night.

Many people... possibly even me, would stay angry, cut the cord on something awesome like this, even HATE someone after that exchange. But not this awesome breed of people... not my awesome carers.

I take them for granted, and keep being horrible WAY too much. But I'm changing... slowly but surely, things I outlined here... and I'm also resolving to keep doing that - and take the next step. Not lean on them for those extra things like poker nights and parties. Maybe I'd miss out on some, and be trapped at home... but hey! In the end I, my thoughts, my mind, determine whether I'm happy or not. And, as I always say - there's always 2 ways of looking at things.

Missing those things will give me time to work on better stuff! Like this.

But all in all... I'd like to say thanks. Not just to Jerry, Eric, Adrien (the boys in the photo), Lucas, Harry, Tony, Nick and Michael (the ones who signed and chipped in for the jersey itself!) - but also Mum, Dad and the Bro for doing this to make me happy. Even though sometimes, I don't deserve it.