During my time in hospital, and the months, years now of near isolation afterwards, my mum was the heart and head of my whole treatment. Keeping me safe, making sure I was comfortable and never alone, coordinating EVERYTHING that came with the cancer treatment, all while working, completing her MBA and keeping the house in order too (I still don't know how she did it)... all those things.

But if she was the heart, Dad was the soul of my cancer "battle". He kept me smiling, organized surprises and events, just him being the larrikin, the easy going person he is made my life that much easier.

The best thing he used to do though (and still does to this day) - was his jokes.

But a joke is wasted, if not told. And though he delivers those jokes with the best of them (even jokes I've heard thousands of times, I don't mind hearing again when he tells them)... he sends us these crackers that he "makes up on his own" all the time. So without further ado, I'll throw in his best ones, so hopefully you too can laugh no matter what too.

Dad and I have a hate-hate relationship on Facebook. Whenever we get the chance, we take cheap shots on eachother. And I mean whenever... Once he hacked my Facebook and shared all the dirty pictures he could. Let's just say I had a week of explaining to do... plus a few friendships tainted...

But this one was gold.

It was plastering day at med school the other week, and my tutorial happened to be on April Fool's day. A GOLDEN opportunity to freak out my parents, right???

Wrong. Because as I posted this.. he snuck in with this gem. 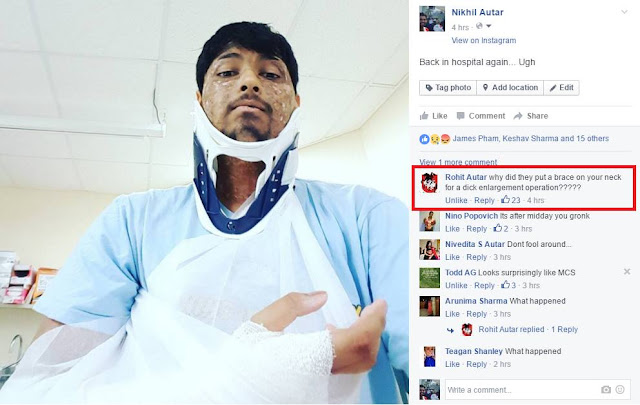 Some of his "original jokes" that he kept saying to keep me smiling in the tough times.

Why We Pay Upper Management the Big Bucks

A company, feeling it was time for a shakeup, hired a new CEO. The new boss was determined to rid the company of all slackers.
On a tour of the facilities, the CEO noticed a guy leaning against a wall and idly picking his teeth. The room was full of workers and he wanted to let them know that he meant business. He asked the guy,
"How much money do you make a week?"
A little surprised, the young man looked at him and said, "I make a little over $400 dollars a week, why?
The CEO said,"Wait right here."
He walked back to his office, came back in two minutes, and handed the guy $1,600 in cash and said, "Here's four weeks' pay. Now GET OUT and don't come back."
Feeling pretty good about himself the CEO looked around the room and asked,
"Does anyone want to tell me what that goof-ball did here?"
From across the room a voice said,
"Sure - he was the Pizza delivery guy from Domino's and was just waiting to collect the money!"

A young man excitedly tells his mother he’s fallen in love and that he is going to get married.
He says, “Just for fun, Ma, I’m going to bring over 3 girls and you try and guess which one I’m going to marry.”
The mother agrees.
The next day, he brings three women into the house and sits them down on the couch and they chat for a while. He then says, “Okay Ma, guess which one I’m going to marry.”
She immediately replies, “The one on the right.”
“That’s amazing, Ma. You’re right. How did you know?”
The mother replies, “I don’t like her."

Father: Why did you get such a low score in that exam?
Son: Absence.
Father: You were absent on the day of the exam?
Son: No but the boy who sits next to me was!

I feel sheepish for sharing this one...

After a talking sheepdog gets all the sheep in the pen, he reports back to the farmer: “All 40 accounted for.”
“But I only have 36 sheep,” says the farmer.
“I know,” says the sheepdog. “But I rounded them up.”

A man went to a pet shop looking to buy a parrot. The shop had several parrots but one was priced much lower than the others. When the man asked why one was so much cheaper than the others, the pet shop owner assured the man that he did not want the cheaper one because it had a very foul mouth.
"I've tried everything, but I can't get him to stop cussing", he explained.
Eager to save some money, the man bought the parrot, sure he could teach the bird not to cuss. He too tried everything to stop the parrot's foul mouth.
Finally, in frustration, he put the bird in the freezer to cool off. After a few minutes, he opened the freezer to find the parrot with a totally changed attitude.
"Please, I'll NEVER cuss again! Please let me out! By the way, what did the chicken do?"

An uneducated father with his educated son went on a camping trip. They set up their tent and fell asleep. Some hours later, the father woke up his son.
Father: Look up to the sky and tell me what you see.
Son: I see millions of stars...
Father: And what does that tell you?
Son: Astronomically, it tells me that, there are millions of galaxies and planets out there!
Father slaps the son hard on his hand and says, "Idiot, someone has stolen our tent!"

A rancher was minding his own business when an FBI agent came up up to him and said, "We got a tip that you may be growing illegal drugs on the premises. Do you mind if I take a look around?"
The old rancher replied, "That's fine, you shouldn't go over there though." As he pointed at one of his fields.
The FBI agent snapped at him, "I'm am a federal agent! I can go wherever I want!" With that he pulled out his badge and shoved it into the ranchers face.
The rancher shrugged this off and continued with his daily chores. About 15 minutes later he heard a loud scream from the field he had pointed out earlier. All of a sudden he could see the FBI agent sprinting towards him with a large bull on his heels.
The rancher rushed to the fence and yelled, "HEY HEY!!", tugging his shirt, "SHOW HIM YOUR BADGE!"

The glass is always half full.

This poor man is facing surgery on both his feet because of severe wounds. The doctor has warned him that he cannot tell how bad the damage is until he gets him in the operating room and he has prepared the man for the worst.
After surgery, the man is slowly waking up and he sees the surgeon approaching his bed. The doc looks at him and says, "I have good news news and I have bad news - which would you like first?"
The man nervously responds, "Give me the bad news first." The doc says, "I had to take both your feet"
"Oh my, what could possibly be the good news?" says the man.
"The guy in the bed next to you wants to buy your slippers!"


I'm gonna keep updating this with more laughs and videos of some stuff he's done too! Not to mention the post with the dirtier jokes he's shared with me in another post soon...
So make sure you subscribe here, like Musings of a Med Student Patient on Facebook, check out my YouTube and all the other funny posts on this blog (look under the "Humour in Hospital" section) and hopefully, dad can keep you guys smiling too =]

It isn't always easy, but you can always find something to smile about during your toughest times. All you need, at times, is a little push to remind you of that. How I used my mind to stay as healthy, hearty, and, most importantly, happy during my cancer journey. And still do to this day. 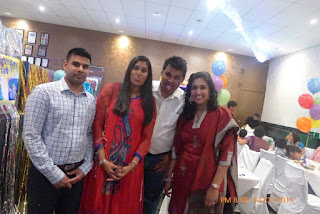 Dad, in any photo. Can you figure out which one is dad?