Well it makes sense. See, 3 years ago, on the twenty-eighth of February, a bag of murky red fluid was put up on my infusion pump in the depths of St Vincent's Hospital. These cells were extracted from the arms of a stranger, transported 4000km to my room to be given on that exact day.

Thing is, I had a reaction to that bag of stem cells mixed with white cells and the occasional platelet, leaving me slowly puffing up like a balloon as puckering red rashes appeared all over my body. The doctors tried every different drug they could before finally listening to me, the patient, and using what had worked before (funny story about that, that still gets Dad mad to this day) to get the cells in. If they weren't done by a certain time, I'd be stuck in this awkward position of having no bone marrow while having to either wait a few weeks for the kind, 59 year old gentleman who they'd tapped to replenish himself, or a few months for another donor (I was lucky enough to have 5, when half don't even get 1) to be screened and approved as a match. Not ideal.

By the time it was done, it was March 1st.

So my transplant, the thing that's brought about a completely new me (stem cell/bone marrow transplants are the only way you can change your blood type!) happened from the 28th of Feb to March 1st. Naturally, the last few years, I've been milking it, and asking for 2 presents (and 2 cakes) to celebrate my, technically, 2 rebirthdays. It's actually 3 if you count my first transplant (that happened in September 2011).
This year, with the leapyear throwing another entire day in the middle, it's gonna be 4.

So I'm gonna have 5 birthdays this year. Better get 5 gifts *hint hint mum*.,.

But this/these ones are the most special...

The second, worst day of my life


When I relapsed a year after my 1st transplant, my doctors were already pessimistic about my chances going into a second transplant. After I developed an allergy (that left me hallucinating in ICU for a few weeks) to the best immunosuppressive drug that's vital for transplant, they were seriously recommending palliative care as one of the options...

That relapse was a slow process for me. My counts had started dropping in June, 2012, and for a long time, we weren't sure why. My bone marrow appeared almost normal. No other sings of disease or infection were there. My doctor was stumped. He thought it was a bone marrow failure, that my donors' stem cells couldn't produce cell in my bone marrow anymore. We were getting second opinions from everyone we could get our hands on as I slowly moved from 1 transfusion every now and then to 3 a week, plus injections to boost my white cells. We got 3 opinions from "world leading haematologists" in the US through mum's work. And they all said the same thing.

On the outside, I was in a state of denial...

My parents were baying for answers. I was actually in some kind of shock, in a mode where I didn't really wanna know, just living life in emptiness as I waited for the balloon to burst. As I got tireder and tireder, as time between appointments got shorter and shorter and as I felt the palpitations of my straining heart grow stronger and stronger, an impending sense of doom came over me. I knew in my own heart that this was it.

But I kept on doing normal things anyway. Going to uni, playing basketball, trying to ignore that little voice in the back of my mind that was growing stronger and stronger, in line with my body's slow deterioration.

A biopsy in October confirmed it. It was happening. My chances, this time, less than 10%.

And at that moment, everything I'd done til that moment fled my mind. My happy-go-lucky attitude, my focus on my health, this certainty I'd had after going through all this that I'd get through it... my composure. All gone.

I stayed that way for weeks. A cycle of going from shock, to feeling numb and feeling angry.

But after a while... I took a step back and wondered, "What was all that accomplishing?"

Nothing.
Except making me feel worse.

"What should I do instead?"

When I asked myself that... The answer was clear.

Prepare for that next step. And try my all to do anything to make it work.

But unlike when I was diagnosed, I didn't wanna lose the anger. I made it work for me.

I scoured the internet, my library, journals... looking for anything that could help me, anything that could be the answer. I started out looking for the real answer. As if this wasn't it... Probably the denial. I remember trying to convince my doctor I had somehow contracted Dengue fever, and that that was what was causing my low platelet counts...

But when I got back on track, as I was looking through anything and everything that could help me... After weeks of using my newfound year of medical knowledge to try and understand the disease and find logical treatments or ideas that could illuminate one way to go, I started looking at the drugs they give for leukaemia usually... And if any could be used in me again.

And that's when I found out about Azacitidine.


I didn't just find it... I proposed a mechanism of action of its working post transplant to increase the immune effect bone marrow transplants work on, that my doctor couldn't refute. And that drug, after my second transplant, is probably the reason I'm still here today.

I'm extraordinarily lucky to even have been here. To have an amazing family who puts up with my crap, as well as my health. To have doctors who've helped me so much, medically, and as friends... nurses who are second mothers and fathers, a medical school that wants me to succeed and some special friends who make it all worthwhile.

And I'm lucky to get to this point, where my relapse rate is less than 1%.


Ok I got some pretty awesome news from a haematologist I saw last week =] The last time I saw him, I'd been told by my...
Posted by Nikhil Autar on Wednesday, 1 July 2015


I lost an eye, I nearly lost the other, my treatments got harder, while getting less and less effective, my cramps got worse... I developed a third cancer, I found out (recently) my nerve damage that's causing my daily, debilitating, cramping is likely to be permanent...
There's not too much to cheer about...

I'm doing everything I can. Often, I can't really do anything... I'm STILL GOING THROUGH THIS SHIT after 3 years!

And though I keep taking that step back, and reminding myself that that doesn't have to limit me, that I can still do the one thing that matters; THINK and that my new normal can be better than the old me if I think about it that way, that doesn't stop the pain I know is coming, the struggle to do any menial task or the burden it puts on my family who deserve much more.

It sucks. And contrary to outside looks... it does get to me. 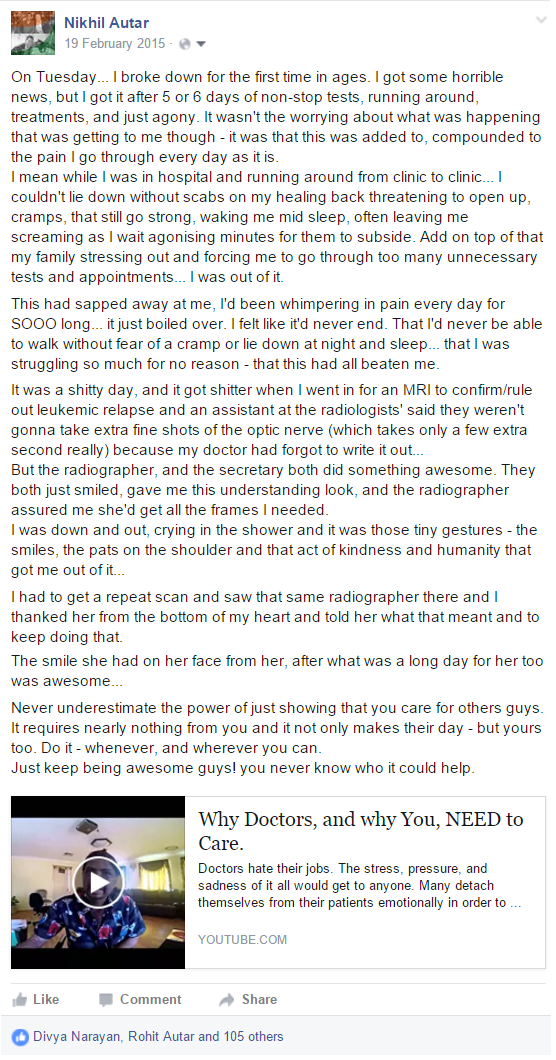 But I realised something the other day. Something I've realised a few times, and kept stored in my head, only to forget about it next time something goes down. It's this.

"I was feeling really horrible; had minimal sleep (the cramps are keeping me up again), forgot to bring my creme to hospital, leaving my skin feeling crappy and overall, just feeling like i was trapped in this shitty body. But after joking around with a patient (he was doing a walking test, going back and forth over the length of the clinic... i asked him if he was lost) and the cleaners... i suddenly found a reason to smile again.

Goes to show that you can be much happier if you focus on others rather than yourself smile emoticon
I'll remember that for next time!"

"You'll always have a second way of looking at things. When you come to some trouble, when you're not happy, when you're scared or when you're doubting yourself - if you can take a step back and question all those things - you'll be able to see that.
I guess sometimes it takes more than just that to get back to you. Especially when you're in pain for so long. Especially when you're depressed.
When that happens, and you find something that helps you get out of it - you need to REMEMBER THAT. What causes it. Write it down. Tell others around you about that. And next time, if you find yourself feeling confronting the same thing, you'll get through. With much less pain.
These systems are what keep you happy. It's what can help you get out of deep, dark holes. It's what can help you succeed in life. It's what can keep you sane.
And I'll definitely remember that for next time."

And applying my own logic to myself... I guess the last thing I should talk about on this day is someone other than myself.

These amazing 2 men who gave up a few days of their lives to give me a second chance at mine.

I've talked about how bone marrow transplants - on the donors' end - really aren't as hard as people think. What with the non-invasive swabs or blood tests that allow you to get onto the donor registry, and (in the 1/400 chance you're called up) the peripheral stem cell collection procedure, which is pretty much a slightly longer blood plasma donation, it's easier by far than what the wider public believes.

But without the efforts of people like these, I, and thousands, possibly hundreds of thousands of people, would never have gotten another chance at life.

YOU could be one of those people! To find out how to sign up for your local bone marrow donor registry, and more about the procedure - click here!

And finally - thank you guys who are reading this.

It's been a long journey. But you've made it better. The chance to help others while often only being able to sit around at home is something I've been blessed with. And be sure... I'm not gonna stop, nor am I gonna waste this opportunity I have.

Anything you guys ever wanna talk about - I'm just a message away -- Details on the side of the page - or just message me here: www.facebook.com/musingsofamedstudentpatient
Posted by Nikhil Autar at 6:34 PM