There's some Good News after Trump's Victory. What Modi's slashing of large bills in India means for the INR and the nation.

Okay so there's some good news today to those of us who are rational...


This genius move was just made to break a hold of corruption in India, and though it's gonna cause some strife in the short run... it could significantly kill off corruption and tax fraud that strangles this nation.

Before I get into it though, I wanted to point out a dichotomy that's become clear to me. On one side, we have Trump, an egotistical man who was born into wealth coming into power and defieing the political establishment with policies that, if they go through the way he says they would, would increase poverty and the burden on the poor (If you're a supporter of his ideas, I'll include some links proving my assertions below). 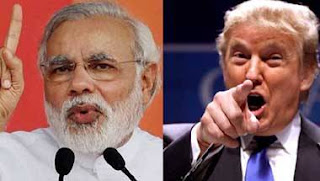 The other is Modi, a man who left his family at the age of 15 to become an activist, to campaign for the good of all Indians. He too is outside the establishment and indebted to no one, as he too rose to governer and then Prime Minister without begging for favours or taking donations from corporations, and he wants to help his nation rise up from poverty, ill health and corruption and it's on the latter that he's struck this potential crucial blow...

What used to happen; everyday people from many professions would get bribes in various forms or else will pay someone, say, 100000 rupees for something worth 500000 (but pay the 400000 in untraceable cash - so you only pay tax on the smaller amount), and you'd end up with stacks of cash lieing around in the homes of tax evaders and corrupt officials. It was so widespread, even good people overall would do it.

But now... he's making those higher denominations of money; the 500, 1000 and 5000 rupee bills (worth about $10, $20 and $100 each) obsolete. Within 50 days, they will become worthless. People will have to take in their bills to the banks immediately where they will be transferred into smaller bills or credit, and where they'll be crosschecked with your tax statements, so those with too much money could not possibly exchange it all and would be, for lack of a more sincere term, screwed. Later down the track, in small increments, larger, rfid traceable, 500 and 2000 Rupee bills (ones which can make any transaction traceable) will be reintroduced slowly. These will be worth heaps!

It perfectly fits that this Icon of a human being, Gandhi, would be smiling down on this audaceous move himself.


The implications of this are interesting to say the least. There's only a small window for this to happen, so there is mass panic going on. I know, my parents are calling everyone and can see it happening...
There will probably be people buying every single commodity they can - petrol, flour, gold would all be getting sold at huge clips and for many times their usual price to try and get rid of those corrupted bills, and there would be huge amounts of money being wiped off the economy. The value of the rupee in terms of purchasing power will drop - 1000 rupees will no longer buy you 30L of petrol, it will buy you 15.
But in theory, there'll be huge reductions in these commodities too - meaning there'll be less stuff to sell in a little while. But though the value of the rupee on the ground should increase even more, as people fight for the scraps that remain and would be willing to pay that same 1000 Rupees for 5L of petrol, eventually, businesses will have too much money that they'll probably end up saving, leading to purchasing power dropping again.This will only increase as companies refill gaps in stock.

The rupee value verses other currencies though? Well, the wipe out should reduce money in circulation, but the value of it will also be lowered eventually, for a short while, as when inventories run out and there's too much money, and too little goods for sale; each rupee will be worth less in terms of purchasing power.
There appears to be $344billion (in US dollars - so that's a staggering $15TRILLION Rupees) worth of black money in circulation, and almost all of it will need to be spent, or else be lost in the coming 2 months, so the "limit" of money to spend shouldn't be a huge factor too.
As the new bills that'll be released slowly, with limits, over the next few months, they'll eventually become something similar to the value they were before, as inventories of goods and produce will rise again too gradually as supply lines at each channel finally will back up (though I'm sure hoardable items like petrol and gold will decrease in value as there'll be less demand for them too). So it should stabilize I guess. And this is assuming so many things, it's not funny. But if the many variables are known, and if stats and figures for them are available, someone could make a LOT of money trading the INR currency on the forex market.
It'll be a bit of a rough few months for the Indian people to say the least, but after that... in theory, any corruption will be traceable.

And the amazing thing is... this was planned. Modi has made it so every citizen in India has a bank account; something that not only allows this bold move to be possible, but also reduces the corruption that used to happen at every level which used to make social welfar payments impossible to dole out. Everyone needs to have the equivalent of a TFN too now, so escaping the wrap is useless, and if you were scamming the system beforehand by claiming lower taxes, then say goodbye to your money.


This is amazing. And it spells out hope in what could be a very dark, dangerous transition for this world. Hope that the hundreds of millions of starving, impoverished people in India can rise up and Make India Great Again.
Trump, on the other hand? We'll see. The reason why I doubt his moves towards protectionism, his tax legislation, and also his healthcare plans are below:

His tax policy; how it actually leaves the poorest less well off (despite their tax cuts) than Hillary's (from a conservative source, and there's more saying the same thing too):
http://www.taxpolicycenter.org/publications/updated-analysis-hillary-clintons-tax-proposals
http://www.taxpolicycenter.org/publications/analysis-donald-trumps-revised-tax-plan

How protectionism doesn't seem to work and why globalism leads to benefits to the order of over $2Trillion for Americans alone:
https://object.cato.org/sites/cato.org/files/pubs/pdf/tbp-028.pdf
Posted by Nikhil Autar at 11:10 PM 1 comment: Links to this post