How We Prepare To Feed 10billion People. My Essay Response.

Preparing for an Impending Food Crisis.


This was my entry into an international essay competition to pick delegates for the annual, amazingly inspiring Youth Agricultural Summit (find out more about it here). Results come out in March. Wish me Luck!!

Well... I actually won this! And got to go to the International Youth Ag Summit - and we delivered our decleration to the UN Food Security Council in Rome 2015! It was awesome, and an update on what we did together can be found here:

In the next 40 years, it is projected that the world population will grow from 7 to about 9 billion, yet for many different reasons, 1 billion people today still do not have enough safe and nutritious food to eat. Demand is rising while resources are dwindling. Solutions are strongly debated across rural, urban and international communities.


Using your own village, town, city or country as your point of reference, tell us what you think are the underlying causes of food insecurity, and the effect it can have on a population, both at a local and global level.


Based on this, explain what changes to agricultural or food chain practices, or personal and community behaviors could help solve these issues to create a more sustainable local and global society.

842 million people, one eighth of the entire world population, are undernourished right now. Of those, 826 million live in the developing world(FAO,2013)... It seems staggering that this exists despite the fact that we currently produce nearly enough food for the world's 7billion people(FAO,2012; Lappe,1998). But it does. And as the global population climbs, and the environment changes further due to global warming, it becomes imperative that we prepare for what may be the greatest global famine in human history.

But before we find solutions, we need to understand the problem. Like many of the world's problems, the major driver of lack of food security is poverty.

It seems intuitive; if you don't have money, you can't buy food. If you can't even afford your own food, how can you, the small scale farmer who produces 70% of the world's food(FAO,2012), feed your nation? Asia's rapid decline in undernourishment rates by 41% from 2001-2012; in line with the socio-economic progress of many countries in the region, as opposed to Africa's increase in hunger rates by over 25% (FAO 2001, FAO 2012, Lappe 2013); where conflicts and instability spurred an increase in poverty rates, in the same period, proves that poverty is proportional to reduced food security. Not being able to purchase ample, quality food leads to chronic malnourishment and stunting, condemning those affected to lower incomes, bad health and a life of poverty(WFP,2014). Poverty is directly correlated to higher fertility rates (Lappe et al,1998), which increases pressure on small, sustenance and commercial farmers to produce for their families, putting income-pressure on the family as well as adding pressure to rural systems and the nation as a whole. Small-scale farmers under constant stress to survive are doomed to not being able to save or otherwise secure capital to purchase more effective seed, fertilizer and equipment for farming; leaving them stuck in this aggressive cycle we know as the poverty trap. When combined with external stressors such as poor market stability, war and displacement, and arguably the most concerning of these; climate change and a rapidly increasing population, the outlook for the world's poor and hungry seems bleak.

The issue can't be fixed through the dumping of food packages though. Food doesn't appear out of thin air. What we need to do is increase its production.
The UN knows this. It forecasts that the world needs to produce 60% more food by 2050; with developing countries needing to produce 77% more to keep up with caloric demand (APRC, 2013).  From intuition alone, it seems that more investment into smarter agriculture is key to getting on top of this problem. The data backs it up; investment in agriculture is five times more effective in reducing hunger than investment in any other sector (FA0,2012) and GDP growth in agriculture is twice as effective as reducing poverty than growth in other sectors (World Bank,2008) too.

My nation, Australia, recognises this, and invests sizeable amounts in both agricultural research and deliverance of physical infrastructure that enables our major aid partners in Asia and the South Pacific to increase crop yields. Yet though we're making valuable investments, that are providing undeniable results, we still only allocate 7% of our aid budget to this sector (DFAT,2014). We need to invest more, as well as improve some aspects of how we invest this aid.

Investment into agricultural research is a major focus of our agricultural foreign aid program. Agricultural research is responsible for the production of food for 60million people/year domestically and 400million people/year worldwide (D'Occhio,2011) and the ACIAR (Australian Centre for International Agricultural Research) heads our aid commitment to research with a very solid, effective framework. Collaboration with international research-agencies such as the CGIAR, inclusion and involvement of scientists from the developing nations we're collaborating with, as well as a focus on designing solutions to mitigate the effects of climate change are key parts of our five-pronged strategy that impress strategy analysts (ACIAR,2011; Marslen,2014). The $448million invested into international agricultural research gave a $30.17billion return, a ratio of 67:1 with direct benefits totaling 15:1 (ACIAR,2013). These benefits are derived not only from the more effective agricultural aid programs that Australia initiates from it, but the sharing of knowledge and consultancy we provide to NGOs as well as private partners.  It's also key to note that Australia, which shares similar challenges to the nations we're helping, such as drought and water management, will receive spill off benefits from this research (Marslen,2014) marking it as an even more attractive investment. This staggering value for money, for us, and them, justifies this investment and makes a strong case for further investment into agriculture.

But right now, Australia's investment into this research, if anything, has been dwindling, following an international trend of declining research in the agricultural sector from 13% of all OECD investment in the Green Revolution, to 4% in 2008 (Harding et al, 2009, Alston et al, 2000).

Though our research and aid program is effective, there are many ways we can improve its impact too.

Furthering partnerships with private organisations, whose investments into agricultural research have increased 4 fold in the last decade (ABS,2001, ABS,2012) and in particular, partnering biotechnical firms with ACIAR, will allow them the opportunity to capitalise on markets such as the five major crops of the developing world that the "Big 7" seed companies currently neglect; sorghum, millet, pigeon-pea, chickpea and groundnut (UN General Assembly Special Rapporteur,2008). Encouraging investment into development of superior seed of these crops, through focusing some public research into this sector, will help garner our companies a niche which is bound to pay off, both to our own nation's economy, and those they're helping, especially as the world population grows further, and food security becomes a bigger issue. Furthermore, encouraging these firms to then initiate programs similar to Monsanto's Project Share, which gives free seed and training to small-scale farmers in India (Monsanto,2014), will result in the spreading of these superior seeds, access to new markets, reduction in micro and macro-hunger, as well as empowerment of small farmers. This is but one example of how further public-private collaboration on research projects can create growth for all parties.

The arguments above makes a solid case for the need to increase and optimise research and programs that improve agricultural yield and supply chains, but the latter example highlights a need to get the benefits of this investment to those who need it most; small farmers. The most successful aid interventions derived from our research, the use of germ-plasm in Indonesian forestry, pig breeding in Vietnam, and integrated pest management in the Philippines; accounting for 55% all conceived benefits of Australia's research programs (ACIAR,2013), have two things in common. They produce solutions that are have wide applications, and ones that can be integrated by small farmers. Focusing more research and aid programs that do that will result in more benefits being accrued for millions of starving people.

There are many, innovative ways that we can get solutions and knowledge to the people who need them most. Delivering products that increase agricultural yield through a micro-franchise/social-enterprise, for-profit model, vastly increases the number of people on the ground who can benefit from research. EcoFuelAfrica is using such a model to deliver kilns that convert farm waste into energy, fertilizer, and extra income directly to small farmers, and is doing this for a profit, which is reinvested into growing it further (EFA,2015). This ensures this innovation spreads, as the model is scalable and the investment is seen as just that, an investment, rather than an expenditure. Establishing, or else investing and expanding similar programs through this model will further ensure our aid, and private philanthropic ventures go furthest.

Increasing small farmers' access to knowledge and markets is another factor that can be improved with innovation. Australia's investment into developing  market infrastructure of Asian/Pacific developing nations (DFAT,2014) is wise, but utilising the region's near 70% access to mobile-phone technology by 2017 (eMarketer, 2011) to spread  knowledge of market prices, weather patterns and farming techniques, and access to financial services is something our aid program can definitely facilitate. Indeed, partnering telecommunications and technology providers with biotechnical firms and government aid programs to deliver such messages can create further economic benefits and employment to us, those on the ground we're helping, as well as companies worldwide too, furthering our impact and making it viable.

Investment into agriculture and delivery to those who need it most is not only one of the most effective ways to secure international food security, but also world poverty and world-suck in general. Australia, though small, is already responsible for much of the world's food security, but there are many innovative solutions and effective policies that can improve our impact, as well as that of others who want to make this world a better place. These are but some of those, and I'd be excited hear others and add mine to what I'm sure will be a gathering of great innovative minds at the 2015 YouthAgSummit. 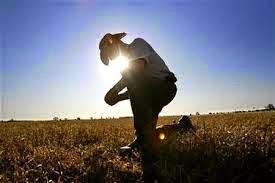