Why the Youth Cancer Movement Matters. Why Connecting To Others Matters.

I got to watch the Waratah's game in a corporate box on Saturday thanks to the Sony Foundation! But in truth, I barely saw the game... I spent the night talking to other cancer patients. One still going through treatment, one just out of it, and others, friends of mine who I'd met in prior events. 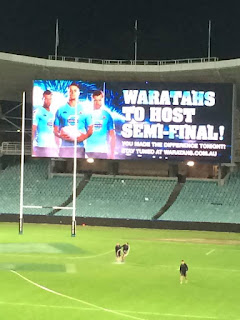 It's seriously amazing seeing young cancer patients see other patients their age for the first time. I still remember my first meeting with another patient... It was 2 days before my first bone marrow transplant. 'Til then I'd been relying on me, breaking all the fears and worries down into pieces and trying to find that best, most healthy, most happy path to follow. And I'd been doing that. But with this new, foreign, hard treatment coming... I was scared. No matter how much I tried to hide it. But seeing, talking to someone who'd been through it all.. that was... amazing.

Not only did I get heaps of tips, heaps of advice for what was to come from them... tips that would keep me going through the roughest month of my pretty rough life, but I also got this sense of companionship. This sense of... hope.
That others before me had been through what I had and gotten out the other side, alive, and smiling.


And that meant the world to me.
As it does to others.

Whether they be patients my age, those who are older, or people going through any trouble for that matter.

One of the guys I met had finished treatment 3 months ago. He was bright, and cheery; happy to be out of there. But at the same time... he'd been through so much. He probably still was going through a lot. He asked me... How did you cope with all the mind stuff, the sadness. Depression going through it.

And I told him. I guess I'd started off, after being diagnosed and devastated,by taking a step back from it all  and looking at things from another perspective. As if I was watching all this happen to someone else. From there, I could question what I was doing, without those negative emotions getting in the way. And I could see a way around it - a second, better path to follow.

But at the same time... it wasn't like it was easy. I didn't become a fearless, courageous soul overnight. I never did, in truth. I was still scared, still feeling cursed for having this disease months into the treatment. I still feel that sometimes today... But every time I felt that way, I did that exact same thing. I took a step back, questioned those doubts and fears, and then looked at what I could, and should change instead. And that made taking that path that left me happiest, the only LOGICAL option.

But with time, with constant struggle... with loss. Not only of other patients, but also my capabilities, it was hard to see anything to be happy about. It took a long time for me to see this after years of struggle even after my treatment was supposed to be done. The struggle of the cramps... the steroids... the physical and mental inhibitions this thing had put on me. But after a while, after retrospectively looking at things.. I did.

We, as humans, tend to focus on the things we don't have. For me... that was all the treatments I was going through. For you it may be completely different, or seemingly trivial in comparison. But whatever it be, that approach inhibits us. It leads to us feeling like we have no value. We have no ability. But when you take a step back and think about it... You ALWAYS do have things on your side! I mean me... after the years of struggle.. after the loss of my physicality, and especially after the loss of half my vision... I felt so stripped, so defeated by this disease. And I still do, sometimes. To this day.

But in the end... I still have so much. Not just in comparison to those who are worse off compared to me... but for ME too! I can still read. Write. Think. I can still help others, from the huge, wide-reaching blog posts, to the tiniest gestures I make in everyday life!

And no matter how much cancer, or other struggles, make us feel otherwise... We still have, and WILL ALWAYS HAVE the ultimate decision on how we feel about it! Again that isn't easy to see all the time. We won't always feel that way too... But that's normal. Indeed, if we admit that it does suck on occasion.. we're only more prepared in case we feel that way again. We'll know, at that point, that we can get out of it!

Talking to him was awesome. Him and his girlfriend were funny, good people, who were honestly thrilled to see that they weren't alone in their journey. And hearing that his doctor had helped him the most in making him feel safe, and healthy, in both his mind and his head (she said to him "I'm not worried about the cancer so much as your head!") was so encouraging. It's great to see doctors our there who get that. Who care for their patients as people. A fine example for you med students and doctors reading this.

But another boy, only 15 years of age there, was just as amazing to see and meet. He started off shy, a little reserved, he must have felt rather conspicuous at first amongst this new crowd. He was still going through treatment. In fact his next chemo was on Monday. Well, I guess it's started now...

But after a while of meeting some seriously amazing, bright souls; in particular, this amazing young lad who manages to be so bright, so cheery, so uninhibited (he was dancing like crazy every time a team scored) and always so welcoming and caring to outsiders, everytime; that changed. He was smiling, joking around with us by the end of the match. And his mum who was there was so grateful.

Because that was the first time she'd seen him smile in months.

Cancer patients are often alone. Bored, scared AND isolated is never a good combo. So if you know someone in their position, or in any position of vulnerability, isolation or sadness for that matter, never underestimate the power of just saying "Hi." and talking to them. Whether you're a doctor, another patient who's also alone, or just a regular soul, do reach out. Cause you never know how you can impact others' lives, as well as yours for doing this. Because honestly... nights, and conversations like these could be the most amazing of your life. They definitely are for me.

And never underestimate the power organisations like Canteen, LifeLine, Stupid Cancer, the Sony Foundation and any other organisation that connects people going through hell to their angels, make. The last link is to a list of each nation's crisis and emotional support programs.

Later this year, Australia is holding it's first ever Youth Cancer Summit. Gathering patients, their siblings, parents and friends in one place; Sydney, to get more amazing meetings like these going. Now, and into the future. Do help get as many people as possible (by contributing to a fund which supports people's travel and sponsors the whole conference) here: